Skip to content
Home » Fresh Thinking Blog, News & Comment » Blog » What we’re reading…‘Difficult Conversations – How to Discuss What Matters Most’

From those wonderful folks who brought you ‘Getting to YES’…

‘Difficult Conversations’ is another publication coming out of the Harvard Negotiation Project, the inter-university community dedicated to developing the theory and practice of negotiation and dispute resolution. It’s kicked off by Roger Fisher, author of the ultimate ‘how to’ book on negotiation – ‘Getting to YES’.

‘Difficult Conversations’ aims to advise on handling those conflicts that we all face at some point in our lives, at work, across the garden fence, in family relationships – however hard we might try to avoid them.

Essentially, its theme could be boiled down to: “We all look at things differently; everyone’s viewpoint is valid”, or, as the authors put it, we interpret situations through different lenses. So, while the boss thinks she’s protecting the subordinate from too much responsibility too soon; the subordinate knows the boss is trying to stymie his career.

The book is liberally sprinkled with real-life anecdotes, and the only gripe I have is that situations are cross-referenced throughout the text (“Let’s return to the conversation between Jack and Michael…”), leaving the reader thumbing back to trace the original Difficult Conversation, as there’s no index.

But it’s a minor point. Overall, this volume is a reservoir of common-sense (which, as we all know, isn’t so very common!), full of practical tips for managing the emotions and achieving an outcome which all parties can accept.

‘Difficult Conversations’ is co-written by Douglas Stone, Bruce Patten and Sheila Heen and is published by Penguin at £8.99. 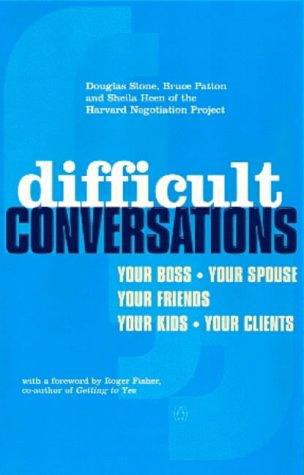 This book review was written by Margaret Cain of M Squared Corporate Communications.